Large Bitcoin Whales Have Added 37,100 BTC To Their Holdings In Recent Days

As per data from the on-chain analytics firm Santiment, multiple Bitcoin holder groups have displayed some strong accumulation recently. The relevant indicator here is the “BTC Supply Distribution,” which tells us which wallet groups on the network are holding what percentage of the total supply right now.

The wallet groups here refer to ranges that denote the upper and lower bound for the number of coins that each wallet in a given group is currently holding. For instance, the 1-10 coins band includes all wallets that are carrying at least 1 BTC and at most 10 BTC right now.

The Supply Distribution metric for this group would then show the share of the total Bitcoin supply that the combined balances of all the wallets falling into this range currently occupy.

Here are the trends in the Supply Distribution curves for each of these bands over the past year: 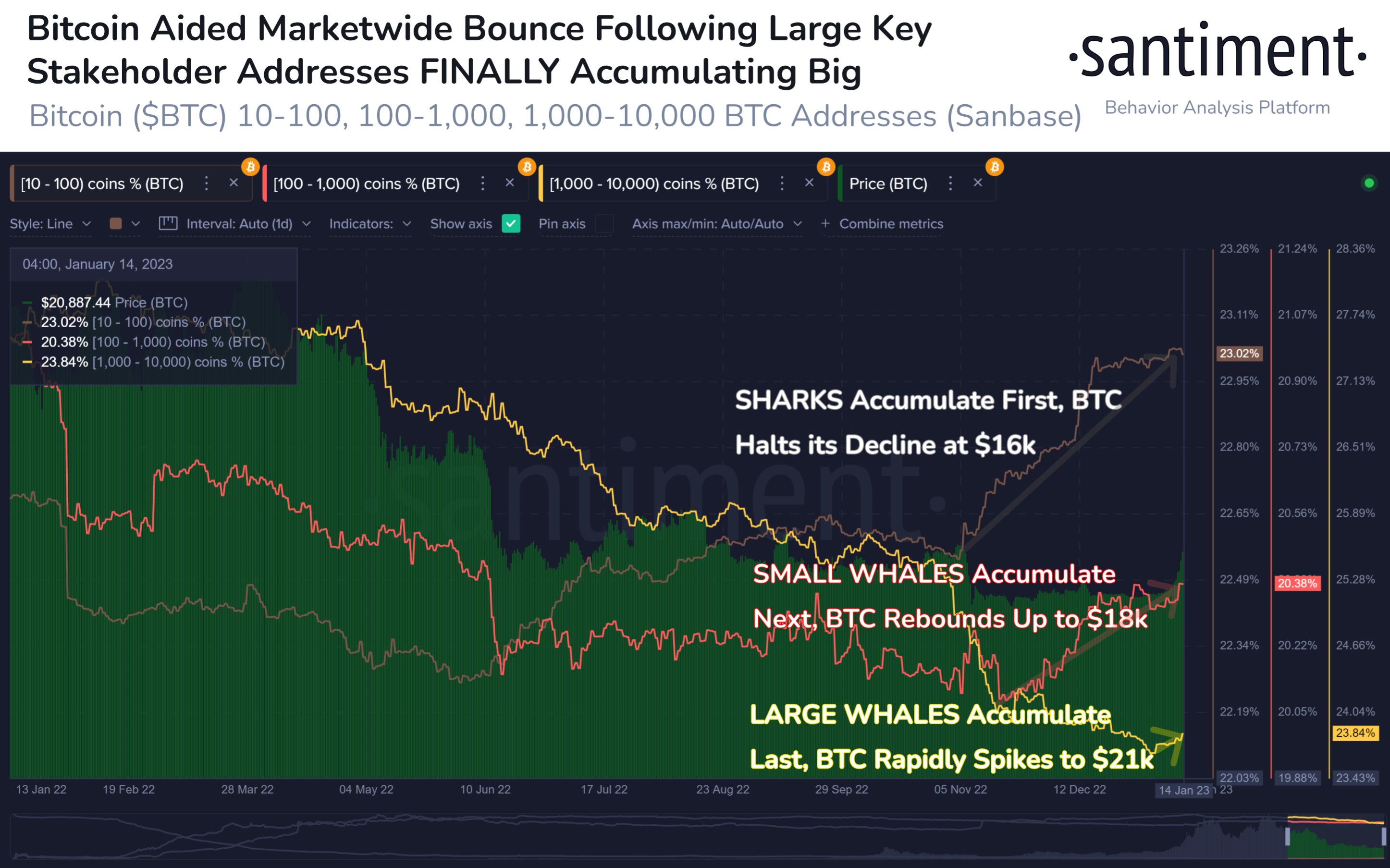 As displayed in the above graph, the total percentage of the Bitcoin supply held by the 10-100 coins band has been rising for the past 10 weeks or so. Holders with balances in this range are usually called “sharks.” In this recent period of strong accumulation, these sharks have added 105,600 BTC to their holdings so far.

The 100-1,000 coins band started accumulating a bit later than this group, as their holdings saw a rise of 67,000 BTC during the last 8 weeks. Investors belonging to this cohort are generally small whales, and they make up an important part of the BTC market.

As the latest rally in the price of the crypto (where BTC has already touched as high as $ 21,000) has come following this strong accumulation from these two cohorts, it would appear that this buying from them helped build up a base for it.

The 1,000-10,000 coins group, which includes the large whales, is a key cohort for Bitcoin, but these humongous holders had rather been selling while the other groups were busy accumulating.

However, in the last 10 days, the large whales have finally reversed their trend and have been buying instead, as their holdings have risen by 37,100 BTC. It’s because of this accumulation that Bitcoin was able to make a rapid sustained breakout above higher levels recently.

With all these different segments of the market now accumulating all at once, signs are looking bright for the current rally. However, the 1,000-10,000 coins group could still be the one to watch for, as things could take a quick bearish turn if these large whales start distributing again.