You are here: Home / Bitcoin / Inside Bitcoins Berlin 2015 – Bitcoin Is Very Much Alive in Europe

A few weeks ago, I had the honor and privilege of attending Inside Bitcoins Berlin, thanks to our friends over at MecklerMedia. It was the first time I ever visited Berlin, so I was very excited about the event itself.  After booking our flight and hotel [neither of which were paid directly in Bitcoin, unfortunately], we were all set to attend another amazing Bitcoin conference.

Inside Bitcoins Berlin: The Location

Once we arrived in Berlin on Thursday, and took our time to explore a part of the city and have a few good meals, a good night’s rest was in order. Think of these Bitcoin conferences what you may, but they are incredibly fun and incredibly exhausting at the same time. But that is all part of the package, so we found ourselves well rested to kick off day one.

The location of Inside Bitcoins Berlin could not be any better. A five-star hotel is always a great choice for this type of event, as not only do you have a great location with plenty of space, but they are also easily accessible. In our case, the Hotel Estrel Berlin was less than two kilometers from our hotel, so it made for a good morning walk. Breathe in the fresh air, grab a bit of breakfast along the way and before you know, this massive building lies ahead of you. 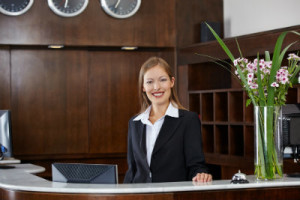 Once you entered the lobby, there were several arrows pointing us in the right direction. We were grateful for that, as the Hotel Estrel in Berlin is humongous – for European standards anyway. After a three-minute walk, we found the check-in desk, where we were promptly presented with our Media Passes for both days of the conference.

Inside Bitcoins Berlin: The People

One of the unsung heroes of Inside Bitcoins events is MecklerMedia’s Stewart Quealy. It was the second time we had the privilege of attending an event hosted by Mr. Quealy, and he did a stunning job during both days as usual. Not just introducing the speakers and panels, but also actively engaging with the audience in between sessions. Plus, he is a very nice man in general and deserves far more praise than he gets.

The people who attended Inside Bitcoins Berlin are an odd breed, and I mean that in a positive way. Most people I know will always refer to us as “geeks”, “nerds” and “socially awkward people”. Granted, all of that is true, but once that first line of a conversation has been spoken, those terms fade away and are replaced with “passion”, “enthusiasm” and “utter brilliance”.

If you are a frequent attendee of Bitcoin conferences, you will see a lot of familiar faces at each and every event. We met up with a few people we already knew – such as Sebastien Couture, Tim Frost, Pavlo Tanasyuk, Yoshi Goto and many others. It’s always a pleasure to see these people in the flesh again, as bonds stronger than friendship are forged during these events.

What surprised me was the sheer amount of people I had never seen at any of the previous conferences I have attended. Not that I am complaining, as it shows a growing interest in Bitcoin in Europe, which is something we desperately need. Plus, there were also quite a few women there, including one lovely lady representing Rakuten (before they started accepting Bitcoin). 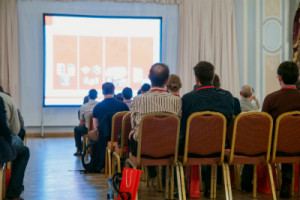 Inside Bitcoins Berlin: The Panels, Keynotes, and Presentations

When you find yourself attending an Inside Bitcoins event, you never know what to expect. Even when the speaker’s agenda has been released a few weeks ahead of schedule, the organization always manages to throw in some surprises. Such as an unannounced appearance by a family member of European Central Bank President Mario Draghi. But that is not all, as this was an appearance in true mafioso style, including a bodyguard (who, besides carrying a gun and knowing how to use it, can also sing opera quite well!).

The regular agenda was of top notch quality as well, and I thoroughly enjoyed every keynote, panel and presentation I could attend. Granted, I did not attend all of them, as my time was occupied otherwise on the second day of Inside Bitcoins Berlin [business proposals and all]. But I took a ton of notes – by hand, with a pen and paper, mind you!

An event like this would not be complete without proper food and drinks. And this is a key area the Inside Bitcoins organization excels at. The Estrel Berlin staff was extremely helpful and nice, the food was of top notch quality – with something for everyone: pastas, vegetables, chicken, meat, fish, potatoes and everything in between – and everyone had a great time.

As far as drinks go, there was plenty of water and soft drinks provided, both at the tables in the room for the presentation and in between sessions. For those preferring a hot beverage, coffee was at your disposal at every moment of the day. I would like to thank MecklerMedia and Estrel Berlin for their excellent service during both days.

More Inside Bitcoins Berlin articles will be coming over the next few days, so stay tuned!

Follow me on Steemit and earn crypto for your best comments: … END_OF_DOCUMENT_TOKEN_TO_BE_REPLACED