Physical coins make awesome gifts and collectibles, especially when you are introducing family, friends and loved ones to the world of Bitcoin and digital currency. Luckily for us, there are quite a few different physical Bitcoin/Litecoin manufacturers, and more and more seem to venture into the space on a yearly basis. However, on this day, we have to report that Coinographic will be closing its doors, and their upcoming batch of golden physical Bitcoins will not see the light of day. 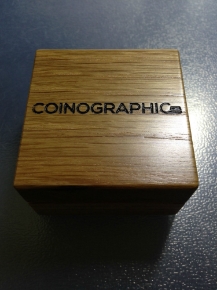 The history of Coinographic is rather brief up to this point, as the company announced their physical coin services in July of 2014 on the Bitcointalk forums. In their first post, Bitcointalk users could start pre-ordering their physical Litecoin coins, which came in either a 25 LTC Limited Edition Coin or a 1 LTC 2014 Production Coin versions.

A few days after their original announcement, Coinographic opened up a design contest for their upcoming line of physical Bitcoins. The winner of the contest would receive a grand prize containing of 5 Bitoin and 2 ounces of fine gold. Needless to say, this contest sparked a lot of interest from the Bitcoin community, and plenty of people participated in order to win that huge prize.

While that contest was going on, more information was released in regards to shipping the physical Litecoins, which customers would pre-order from July 13rd onwards. The boxes which would contain the 1 LTC coin were delivered at the end of July, coins themselves were delivered on July 29th, with the holograms to arrive on August 1st. Assembling the physical Litecoins would take a few days, and shipping would begin on August 4th.

In regards to the 25 LTC physical coins, assembly of pre-orders was set to begin on August 13th, and coins would start shipping on August 18th. All seemed to be going well up until this point, and tons of designs were being submitted for the physical Bitcoin design contest. What could possibly go wrong at this point?

On August 2nd 2014, Coinographic posted an update on the Bitcointalk forums, explaining how the holograms for both the 1 LTC and 25 LTC coins were running 6-7 days behind the original schedule, but they would be in the hands of the Coinographic team by August 8th. A little delay can happen of course, especially when relying on third parties. Eventually all coins got shipped out, albeit a bit late.

September 1st was the date when Coinographic announced a voting contest for the top 5 designs in the physical Bitcoin contest. The winner would receive the first of this limited run of coins (100 in total), covered in 2 ounces of gold and loaded with a balance of 5 Bitcoin. The runners up would receive 0.25 Bitcoin each, so everyone would be a winner in the end.

However, Coinographic made a drastic change to the voting a few hours later, as they suddenly decided to open up the voting to all submitted designs. As far as the prizes go, they remained the same, with only the top 5 designs getting something for their efforts. Needless to say, while this might seem more fair at first glance, it really was unfair to pick 5 designs, and then revert that decision just a few hours later.

Winners were announced on September 11th in this post on BitcoinTalk, and distribution of the prizes would begin shortly. More information in regards to the production and assembly was revealed as well, as Coinographic said it would take about 3 months before the gold physical Bitcoins would be assembled and ready to ship.

But that is not all, as another design contest was announced on September 30th, as even more physical Bitcoin coins were to be created. Designs for two new coins were to be submitted : the Bitcoin Tenth coin (.999 silver plated brass) and the Bitcoin Half (.999 gold plated brass). The deadline for submissions was set to October 31st 2014, and the winners would receive a fully funded coin of their winning design + 2 Bitcoins. Second to fifth place would receive 0.25 Bitoin each.

Coinographic also announced the ability to pre-order their 2 ounce silver 2 BTC limited edition coin on October 8th 2014. This would be a run of 500 physical coins, which would be in stock and ready to ship by the end of November 2014. Coin #1 of the 500 coins was made available for auction, the coin would come funded with a 2 Bitcoin balance, and bidding was set to conclude on November 30th 2014.

Cash Flow Problems Lead to Closing Down the Company

Unfortunately for all parties involved, a sad announcement was made by Coinographic on January 12th of 2015, as they revealed their cash flow problems. A lot of money was invested in their original Litecoin collections, which didn’t sell as fast as Coinographic would have liked, not even at production costs. As a side effect, prizes for a few of their design contests could not be paid out in time, as there was simply no funds to pay the winners. However, Coinographic did say they would honor all payments as soon as some money was flowing in.

Note from the author : Maybe it’s just me, but physical Litecoins just don’t have that same appeal as a physical Bitcoin. What are your thoughts?

A new announcement followed on January 28th of 2015, as the situation was starting to look even more dire at that point in time. Low volume sales combined with a decline in digital currency values had left Coinographic crippled, and the company would not be able to operate as a business from that point forward.

Things started going south at the end of November 2013 (I assume this should be November 2014), as Coinographic’s main investor cut off the cash flow. Despite several attempts from Coinographic to secure additional funds, they were unsuccessful in scraping together enough funds to keep the company alive.

However, there were plenty of pre-orders to be fulfilled and no actual funds to produce the coins. A form has been implemented on the Coinographic website, where users can fill in all necessary information in order to compensate them for their pre-orders. It was made clear from the beginning that it would be impossible to instantly refund pre-orders in digital currency (either Bitcoin or Litecoin), which caused outrage among Coinographic customers.

On top of that, several people had received their physical Litecoin coins, which still have to be funded. All of the necessary funds to complete this process will come out of Coinographic’s own pocket, and it can take up to 14 business days after completing the form on the website until funding is completed. Not all physical Litecoin coins had been shipped out at that point, due to an outstanding bill with the hallmarking office, which is responsible for releasing the coins to Coinographic.

But what about the people who pre-ordered these physical Bitcoin coins? They are left with two options : either receive a refund in funded coins from Coinographic’s Litecoin collection, based on prices currently on the Coinographic website. Coin refunds are set to be delivered within 30 days after making the request.

Option two is to negotiate a payment plan with Coinographic directly,so they can refund the amount of digital currency paid for the coins. These payments are also coming out of Coinographic’s own pocket, and can take up to 90 days to complete, after you filled in the form and made the payment plan request. Refunds are to be issued in three installments, the first one to take place 30 days after making the request.

It is sad to see things go downhill so fast for Coinographic after their very promising start in the world of digital currency. We wish them all the best in future endeavours, and sincerely hope all customers receive a refund in due time.

Follow me on Steemit and earn crypto for your best comments: … END_OF_DOCUMENT_TOKEN_TO_BE_REPLACED