You are here: Home / Archives for John

U.S. Senator John Hickenlooper (D-Colo.) has become one of the first Democratic senators to publicly criticize the slow approach to crypto taken by Gary Gensler, chair of the U.S. Securities and Exchange Commission (SEC).
CoinDesk

John McAfee was no ordinary guy.

He established himself as a leader in the cybersecurity industry by creating one of the largest antivirus companies ever.

What happened next, though, is what truly propelled him into the public eye.

The American software mogul, who was born in Britain, did stints at NASA, Lockheed Martin, and Xerox before releasing McAfee VirusScan in 1987.

As a result of VirusScan, a multibillion dollar industry was born in the computer world. He finally sold the platform to technology giant Intel for more than $ 7.6 billion in 2011.  Read more...

This is a preview of John McAfee: Inside The Chaotic Life Of The Enigmatic Cybersecurity Legend. Click Here To Read the full post

Crypto bull and 2020 presidential candidate John McAfee claimed in a tweet Friday that the CIA has attempted “to collect” him and his wife Janice Dyson at sea. The tweet included a photo of McAfee and Dyson flexing some fire power. It appeared to be warning to the authorities McAfee says are hot on his […]

In the wake of Donald Trump’s viral tweet denouncing bitcoin and cryptocurrency in general, John McAfee has come rushing to its aid. In a series of tweets, the crypto evangelist has ridiculed the U.S. president’s comments regarding the use of digital currency to facilitate criminal activity. My response to Donald Trump regarding his "Dislike of […]

“Cybersecurity expert” and noted crypto pumper John McAfee accidentally revealed his Social Security Number this morning, tweeting out some documents that contained the information. CCN has determined it would be unethical to post a screenshot since the anti-virus pioneer has already deleted the tweets, but we retained the link. McAfee later tweeted the same documents, […]

John McAfee doesn’t want you to associate him with his eponymous antivirus software company. In a recent tweet, he asked the public to stop blaming him for McAfee antivirus software problems. He reminded followers that he hasn’t been part of the company he built for the past 20 years. The gentle reminder, which was in […] 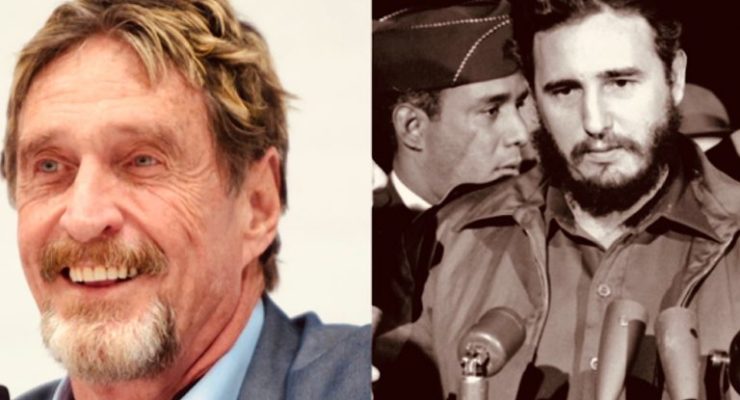 Former antivirus software guru and 2020 Libertarian presidential “hopeful” John McAfee is a controversial figure, polarizing opinion in politics and culture, and taking a bold stand against the U.S. federal government. Most recently this has involved offering to help the Cuban state develop its own cryptocurrency in the interest of avoiding U.S. interventionism in trade.

This is a preview of A History of Violent Intervention: John McAfee Offers to Help Cuba Resist US Sanctions With Crypto. Click Here To Read the full post

The nation of Cuba has formally announced plans to utilize cryptocurrency on an international scale, and one resident couldn’t be happier. John McAfee, who is currently hiding out somewhere in Havana, praised the decision by the Cuban government and offered his help. Cuba is planning to use Cryptocurrency to get around the 63 years of […]

The post John McAfee Over the Moon, Offers His Services to Cuba on Crypto appeared first on CCN Markets

John Oliver, the host of “Last Week Tonight” on HBO, took a shot at Amazon on his latest episode. His rant wasn’t limited to just Amazon, and he targeted the entire warehouse industry for the crummy working conditions that employees must endure. But he singled out Amazon because they are a leader and trendsetter in the e-commerce […]

By CCN Markets: International man of mystery, wanted fugitive, 2020 presidential candidate. What do all of these have in common? John McAfee. In an exclusive interview, CCN talked to McAfee about his new trading portal ‘McAfee Magic,’ his views on money, and his troubles with the government. Here’s everything he had to say: Magic Arbitrage Trading Platform As CCN reported previously, McAfee’s new magic trading platform went live earlier this month. But we haven’t talked much about the debit cards associated with it yet.  We know that the cards will require very little KYC, they’ll have a QR code on  Read more...

This is a preview of John McAfee Interview: Magic, Money, 2020 Presidential Fugitive. Click Here To Read the full post

By CCN Markets: Bitcoin millionaire John McAfee, who’s still running for U.S. president despite being a fugitive for tax evasion, has selected Havana, Cuba, as his campaign headquarters. John McAfee: ‘I Am Being Politically Persecuted’ McAfee made the revelation on Twitter, where he announced his “Campaign in Exile” under the banner of the Libertarian Party. McAfee noted that he was forced to make his headquarters in communist Cuba because he’s “being politically persecuted” in the United States. “My headquarters, since I am being politically persecuted, is now located in Havana, Cuba. I am still fighting. Stay with me, America!” McAfee:  Read more...

This is a preview of Bitcoin Millionaire John McAfee Makes Cuba His Presidential HQ. Click Here To Read the full post

By CCN Markets: Ten-time Grammy award winner John Legend recently appeared on CNBC to discuss how Spotify, Apple Music, and other streaming services have completely upended the music industry. His comments portend the market-shattering disruption that awaits the gaming industry once it undergoes its own streaming revolution. John Legend Says Streaming Has Changed ‘Everything’ It’s undeniable that John Legend is one of the leading authorities in the music business. So you should take note that when asked about the rise of services such as Apple Music and Spotify, Legend claimed that streaming has “changed everything.” He highlighted the improvement in  Read more...

This is a preview of John Legend: Streaming ‘Changed Everything’ in Music – Gaming’s Next. Click Here To Read the full post

By CCN Markets: You might think that Tyler Winklevoss has gotten ahead of himself by predicting the bitcoin price could cross $ 15,000 if it surpasses the $ 10,000 level. That is unless your name is John McAfee, in which case that forecast is absurdly low. McAfee is doubling down on his bullish price prediction, saying that BTC $ 100,000 will open the floodgates for the cryptocurrency to power higher to $ 1 million. Unfortunately for the Winklevii, that wasn’t the end of the trolling. McAfee took it a step further by tweeting an image of “Bitcoin Billionaires” with a personal message from the  Read more...

This is a preview of John McAfee Trolls Winklevii on Bitcoin, Says Cameron Is ‘True Power’. Click Here To Read the full post

By CCN Markets: In a somewhat bizarre video tweet around lunch on Friday, cryptocurrency aficionado and repetitive presidential candidate John McAfee said he’s launching a website dedicated to exposing corruption in the U.S. government. This will perhaps be McAfee’s second-most important launch of recent times, having recently unveiled a cryptocurrency exchange. Corruption within the American Government pic.twitter.com/VyWIpqKKbm — John McAfee (@officialmcafee) June 14, 2019 Crazy McAfee Doing Some Public Good McAfee is an outlandish personality anywhere he is, which is either a defect or a point of admiration depending on where you stand. In either case, most people wouldn’t want  Read more...

This is a preview of John McAfee Pledges to Expose Corruption in the US Government. Click Here To Read the full post

On June 11, following his latest tirade on social media, John McAfee announced the launch of his new cryptocurrency trading platform called McAfee Magic. The project allows for manual and automated crypto trading across a variety of digital asset exchanges all displayed in one user interface. According to the website, the service is the second product besides his well-known antivirus software to bear the McAfee name.

This is a preview of John McAfee’s New Trading Platform Aims to Give Traders a Magical Experience. Click Here To Read the full post

Team Secret, an esports organization that fields teams in Apex Legends, Dota 2, Rainbow Six: Siege, Fortnite and Rocket League, announced Wednesday that it has added the former chairman and CEO of UBS, John Costas, to its management team. We are delighted to welcome John Costas, former Chairman and CEO of @UBS, to our leadership team. We have a […]
SludgeFeed

By CCN.com: John McAfee announced Tuesday afternoon in a video tweet that he and his wife have been indicted by a grand jury in Tennessee on federal, felony charges related to what McAfee acknowledges in the video are eight years of delinquent U.S. federal income taxes to the IRS. The McAfee 2020 Campaign is, as

U.S. presidential candidate John McAfee announced on Tuesday that he has fled the country. According to McAfee’s recent Twitter video he’s “living in exile” on a boat because he’s been charged with felonies handed down by the Internal Revenue Service (IRS).

This is a preview of Presidential Candidate John McAfee Flees U.S. for Alleged Tax Fraud. Click Here To Read the full post

John Bigatton, the only representative for BitConnect Australia, has had his assets frozen by the  Australian Securities and Investments Commission (ASIC), functions very similarly to the Securities and Exchange Commission in the United States. Bigatton can’t travel, as part of the ongoing investigation. In the video below, Bigatton celebrates with BitConnect victims as cash rains

John Key, former New Zealand Prime Minister, is the latest in a line of notable individuals involved, albeit unknowingly, in a cryptocurrency scam. Bitcoin fraudsters are using the image of John Key promoting a Bitcoin scam. According to a report in Stuff.co.nz, the ad was designed for a company known as Crypto Revolt. So far,