You are here: Home / Bitcoin News / Vexanium: A Decentralized Platform is Disrupting the Marketing Ecosystem

An innovative decentralized marketing ecosystem called VEXANIUM, which helps to cut costs and improve efficiency and transparency for commercial businesses, is being launched by Danny Baskara – a Southeast Asia based e-commerce pioneer and team.

Founder and CEO Danny Baskara previously built and sold Indonesia’s largest voucher and couponing platform Evoucher, which was with more than 2 million active users. After 7 years of building Evoucher, he realized that the blockchain can solve the fundamental problems of this industry. The idea for the VEXANIUM ecosystem was born.

The blockchain based ecosystem which VEXANIUM creates will solve the major pain points that this industry faces today. In Asia, a majority of retailers use online promo marketing platforms such as Groupon, Dianping or Meituan to win new customers. Promo marketing strategies rely heavily on campaigns on these platforms which provide substantial traffic and sales.

These platforms charge an average of 15% – 20% in commission per transaction through a CPA (Cost Per Acquisition) or CPS (Cost Per Sale) structure. An increasing number of retailers struggle because these commissions, together with the discounts offered, represent too high a proportion of their margins. To protect margins, retailers often end up giving lackluster promotions that are either unattractive or with unrealistic terms.

Meanwhile, customers are often frustrated when trying to utilize a voucher or redeem their gift cards and coupons. Common difficulties include using vouchers that have already been utilized, expired, are lost or with unreasonable T&C requirements.

By using the VEXANIUM platform, companies can create points in loyalty program applications in the form of digital tokens. […] Typically such incentives are rewards to customers in Cost Per Acquisition (CPA) activity. The tokens can also be converted into coupons or points that can be used in corporate applications. 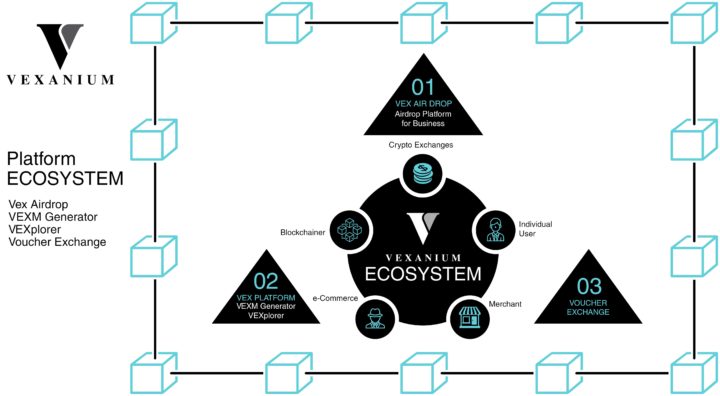 A study conducted by GfK concluded that 49% of consumers would gladly switch brands for savings in the form of a coupon. In the retail market, South-East Asia and Indonesia, in particular, are some of the fastest growing markets globally, with the latter boasting a population of over 260 million people. The importance of vouchers and coupons for retailers to attract new customers in those regions is significant.

VEXANIUM will revolutionize this space by bringing the voucher and couponing industry on-chain. The VEXANIUM platform will also naturally serve existing blockchain businesses in their user acquisition, activation and retention. This makes it attractive for both businessmen, crypto-enthusiasts and ordinary users.

The VEX app features an integration with selected crypto exchanges in order to allow users to directly trade their VEX token balance on the exchange. Also, the VEX Exchange will allow consumers to trade vouchers among themselves and set their own prices. Customers will be able to store and redeem their voucher tokens via VEXANIUM app.

One game-changing use case of the VEX Platform is the lucrative “airdrop” market, which will allow blockchain companies to create airdrop campaigns for acquiring new customers and rewarding existing ones, using the VEX token.

For companies that want to take advantage of the VEXANIUM platform and want to create digital tokens on their applications are required to purchase a large number of VEXANIUM digital tokens -VEX, because each transaction is using the VEX token. It’s part of VEXANIUM ecosystem.

This will be facilitated via the VEX web and mobile apps.

In an exciting move, the VEXANIUM marketplace plans to be fully functional and open to merchants and individual users in Indonesia by Q4 2018. The company will complete the establishment of the ecosystem by launching VEXchange and VEXplorer by Q2 2019. Merchants and enterprise users can create voucher tokens and start their marketing campaigns all seamlessly via the one-stop mobile app.

The company plans to launch in other major cities in Asia, including Kuala Lumpur, Ho Chi Min City, Seoul, Hong Kong, Bangkok and Dubai in 2019. And will then expand to big business hubs outside of Asia in 2020.

VEXANIUM’s Co-founder Robin Jang is also the Co-founder of Coinone Indonesia, the major South Korea cryptocurrency exchange that just launched their Indonesia chapter recently. Prior to joining VEXANIUM, he was the Co-founder of Cashtree, the largest online marketing platform in Indonesia and managed the company to achieve over 10 million users. A number of angel investors are already backing VEXANIUM, such as Marcus Yeung, founder and CEO of SEAbridge, and Joseph Aditya, CEO of Ralali, the largest B2B marketplace portal in Indonesia.

The immutability, liquidity and decentralized nature of VEXANIUM will revolutionize this market while introducing a whole new wave of retailers and users to the blockchain era.

The post Vexanium: A Decentralized Platform is Disrupting the Marketing Ecosystem appeared first on Bitcoinist.com.

Follow me on Steemit and earn crypto for your best comments: … END_OF_DOCUMENT_TOKEN_TO_BE_REPLACED