A major bank in Thailand has reportedly terminated the bank account of a local cryptocurrency exchange, following an announcement by the central bank prohibiting financial institutions from five cryptocurrency-related activities. Meanwhile, the Thai government is actively working on providing a legal framework for cryptocurrencies. 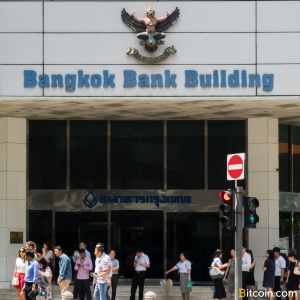 The bank suspended transactions of the Thai Digital Asset Exchange (TDAX), a major crypto exchange in the country, “on the grounds that TDAX’s business operations are not in accordance with its business purpose registered with the Commerce Ministry,” the news outlet detailed.

TDAX is a local cryptocurrency exchange with 5.5 million baht (~USD$ 175,000) worth of registered capital, the publication noted. The exchange’s founder and CEO, Poramin Insom, told the news outlet that the company “plans to increase capital soon in order to apply for an initial coin offering (ICO) licence with the [Thai] Securities and Exchange Commission.”

Regarding the exchange’s bank account with Bangkok Bank, the CEO clarified:

The bank called and asked whether there was an operating licence for proof, but I answered that this business was not under legal jurisdiction, so the bank said it would terminate the company’s bank account, as this business had no licence.

A source close to the matter at the bank told the news outlet that TDAX had opened a savings account at the bank. However, bank officials claimed that some documents were missing, “therefore the bank decided to block all transactions through the account,” the publication noted, citing the announcement by the central bank a week prior.

With all transactions through TDAX’s bank account blocked, the source said the exchange “also asked for its bank account to be closed,” claiming that the “bank has no mandate to force customers to open or close any account.”

Last week, the Bank of Thailand issued a circular asking financial institutions to not get involved in five different crypto-related activities, none of which involves opening accounts for crypto exchanges, however. Meanwhile, the government is actively working on cryptocurrency regulations, which are expected to be finalized this month.

Despite Bangkok Bank’s action, Insom indicated that the “termination of TDAX’s bank account with Bangkok Bank has not affected the trading of bitcoin and 10 other cryptocurrencies,” the publication conveyed.

While Bangkok Bank has closed TDAX’s account, there are other banks still providing service to the exchange. Another major Thai bank, Kbank, clarified in a statement:

The bank [Kbank] is still facilitating TDAX financial transactions through its account after the bank discussed the matter with the central bank and found that such an account is not regarded as supporting customers in making virtual currency transactions.

Do you think other banks will follow suit? Let us know in the comments section below.

Images courtesy of Shutterstock, Bank of Thailand, and Kasikornbank.

Follow me on Steemit and earn crypto for your best comments: … END_OF_DOCUMENT_TOKEN_TO_BE_REPLACED