You are here: Home / Novice/Beginners / What is Bitcoin? – The Bitcoin Wallet

When it comes to storing your Bitcoins in a safe and secure environment, there are plenty of options to choose from. Similar to traditional fiat currency or credit cards, you want to keep your digital currency in a wallet. These wallets can exist in either a physical or digital form, each of which has its advantages and disadvantages. But what is a Bitcoin wallet exactly?

The Concept of a Bitcoin Wallet

You can look at a Bitcoin wallet as a way to store your bitcoins, but there are a lot of other functions a Bitcoin wallet can perform as well. Depending on whether you are using a software or hardware solution, those features may differ in quantity. However, the core functionalities exist in either version, which is what we will discuss in this article.

The main function of a Bitcoin wallet is storing all of the information necessary to transact bitcoins. Holding and storing your digital currency is one of the most common uses for a wallet, as you can receive, store and send Bitcoin with your wallet. Because of Bitcoin’s transparent nature, anyone can keep an eye on a publicly known Bitcoin wallet address to ensure funds are stored, spent or deposited.

Even so, the term “wallet” is not exactly to Bitcoin as a currency, as it isn’t storing the coins themselves. You should view a Bitcoin wallet as a tool to store your credentials which are required to access your holdings expressed in a Bitcoin value. For example, if you have a Bitcoin wallet with 1 Bitcoin in it, you are not storing the actual coin, but rather a piece of data that represents your ownership of that Bitcoin.

If you have been reading our previous parts of the “What is Bitcoin?” series, you may recall how we mentioned that Bitcoin addresses operate by using a public and a private key. A Bitcoin wallet is a collection of both of those keys, which in turn give the owner access to spend and receive coins to and from that specific address.

One of the main things a Bitcoin wallet can not do is store different digital currencies or digital assets that are not Bitcoin. The Bitcoin wallet is set up with one specific use in mind, and that is usability for Bitcoin purposes only. Seeing as how there are so many platforms being built on top of the Bitcoin blockchain – such as colored coins, for example – this functionality may be expanded in the future though.

As I mentioned before, there are several types of wallets. The most commonly used type is a software Bitcoin wallet, which is to be installed on a computer, tablet or smartphone. Software Bitcoin wallets are free to use and receive regular updates from the Bitcoin Core developers. However, these types of wallets will require the user always to be connected to the internet [and the Bitcoin network], which make them a potential target for hackers. 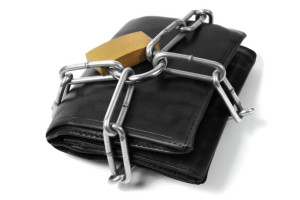 Online Bitcoin wallets have proven to be quite popular over the past few years, as many people have migrated from software wallets [which take up quite a lot of space because you have to download the entire blockchain onto your hard drive]. However, when using an online Bitcoin wallet, you are relying on a third-party [centralized] server in order to access your funds. If that service would ever shut down or disappear altogether, your coins will be gone as well.

Physical Bitcoin wallets exist as well, which make the crossover from storing traditional fiat currency to storing Bitcoin a bit easier. The main advantage of a physical wallet is the fact that these types of Bitcoin wallets are far more secure compared to their previously mentioned counterparts, as all of the necessary data to spend Bitcoin is stored in an offline manner.

Note from the Author: Paper wallets are one of the most commonly used types of physical Bitcoin wallets.

Last but not least, hardware Bitcoin wallets are slowly gaining more adoption as well. Hardware wallets are by far the most secure way of storing your digital currencies, but they are also the least convenient to use. However, hardware wallets are subject to constant improvements, and we see new types and new functionalities hit the market quite often.

We will do a separate article on each wallet type individually in the near future.

Follow me on Steemit and earn crypto for your best comments: … END_OF_DOCUMENT_TOKEN_TO_BE_REPLACED